Our GymkhanaGP competition :-) in English

The day of broken footpeg - glory to the mechanics!

This day is gonna tell the boys from men! After a few weeks of sunny weather, on this very Saturday morning, 25th of May, the skies covered with clouds, pouring sheets of a cold rain. Despite of this, the brave gymkhana racers showed up at the competition event organized by "motoFUNdation" and there wasn't any single rider missing of those who had registered. Special applause to the debutants who, riding their serial, unarmed bikes braved to challenge the traps of slippery surface between colorful cones.

There were almost 40 riders, who came not only from West Pomerania region, but also from Warsaw, Wrocław, Cracow, Poznan and Berlin. Gymkhaners of top ten of previous season competitions [click on "czytaj wiecej" to READ MORE:]
organized by Honda also appeared. The experience in Honda series of events was the criteria of qualification to the "proffesional" class. Debutants and riders who had only participated in local events had their own classification with even more valuable prizes.

At the beginning there was GP8 contest. In this set of five 12-​metre figure-​eights time trial the best one was "Rufi", Rafał Dziki-Sereda, a.k.a. "Dark Horse", because during his second all-Poland competition last year, at Wrocław round of Honda Gymkhana, he rocketed into 2nd place of the podium and achieved President Cup for the dessert. Taking the extreme zero grip of the surface into consideration, the result of 32,00 sec was really good. As a reward Rufi received summer jacket Mesh2 sponsored by Modeka, and gadgets from Motul.

The day of broken footpeg
Practice on rain washed asphalt was unfortunate for Beniamin Mucha, 2012 vice-champion of Poland. Gymkhaner from the city of Wrocław, who rode 380 km to Szczecin on his CBR, crashed during practice and broke right side footpeg. "LocK" Darek Łuksza from Berlin also crashed and bent handlebar, and Oscar Kubicki was up to ride Suzuki 750, but the wiring died. Therefore Lila, the main coordinator of the event, lended him her CBR F4i, but also in this bike the footpeg broke. And one of debutants, "Wild" Krzysztof Dzikowski from Szczecin, in first course of timed runs crashed and - as you have probably guessed already - broke a footpeg...

The organizers did not leave the unfortunate guests alone. One of the "fathers" of Gymkhana in Szczecin, Adam "Adaśko" Olesiuk (not to be mistaken with Adam "The Instructor" Sylwanowicz, the other of fathers of this beautiful young "girl"), knows exactly what the damage at the competition is about. At the previous years 1st Warsaw round of Honda competition Adaśko was trying to find and buy and then replace ingition system, and completed at 2 A.M. in the night before the race. At the 2nd round in Radom he was patching up the broken radiator. Now, Adaśko fixed LocK's handlebar, and arranged aluminium welder, who despite of Saturday morning express arrived, took Beniamin's footpeg to the workshop and brought it back fixed before timed runs began. And "Wild" was lucky to ride CBR, so Adaśko replaced his broken footpeg using the other unbroken of Lila'a bike...

Oscar replaced Suzuki with his old two-stroke TDR 125, which had been supposed to be used by the only girl gymkhana rider "Toast" Agnieszka Jaszewska. By the crash during first timed run Oscar damaged more himself then the motorcycle, but just before the second run the venerable Yamaha died of heart attack. With the engine seized up she was laid at the cementary of dead horses, and Oscar and Agnieszka completed the second run on my "Little Girl", Honda CBF 250. The same bike was used also by the youngest participant of the competition, 18yrs old "DrMarino" Mariusz Juszczak from Cracow. Having no possibility of bringing his bike to Szczecin, he took overnight train and endured 14 hrs of travel by crappy Polish railway, only to participate in GP8 contest - because for this competition the organizers provided a motorcycle for those who couldn't or wouldn't use their own. I was so impressed by Marino's attitude that I lended him my motorcycle. He performed well on my Honda, specially in second timed run, achieving time of 2:09. In first wet run only three "experienced" made better time!!! Unfortunately, earlier on, mistaking the course, Mariusz lost his podium. He wasn't the only one to be led into the trouble by a pretty "snail", the novelty invented by "Microphone" Kamil Dolecki, the main referee of the competition.

Started on wet, ended on dry
The rain stopped in the afternoon, so the first in history of Poland wet Gymkhana was full of dramatism, just as 4th round of MotoGP the week earlier, when the track was becoming dry during the race and the results were so unpredictable.

Szczecin's course was of the kind that gymkhaners describe as "fast". After the "amateur" class runs everybody was impressed by "The Beatle" Grzegorz Żukowski, who, despite the rain, controlled perfectly his heavy Honda Transalp and made the fastest time of 2:15 in the first timed runs course, better than the racers on nakeds and dirt bikes. The experienced rider was competing with his son Patryk "Dominator91", as his nickname reveals also riding dual-sport bike. The main referee allowed "Wild" to repeat his run, giving him only one second penalty for the crash in first attempt, and "Wild" made second time (2:17 incl. penalties). The battle for third place on a podium was between "LocK" and the best of previous year's GymkhanaGP debutant "Smelka" Tomek Smela. Despite of not entirely fixed handlebar LocK made it 4 seconds faster than Smelka. The Beetle apparently lost a bit his head during second run made a mistake in the course. Despite of this, riding on dry he made better time (2:11 + 2 sec. penalty) than in first wet run, but lost the top of the podium to Wild "Good Luck In Bad Luck", who made clear 2:02 and won Askari jacket sponsored by Modeka.

Four dark horses
The competition of "the experienced" was even more dramatic. Adam "The Instructor", Adaśko, and stunter Ciut11 (two latter using drift technique) made mistakes on the course - as they always do.... Oscar "Rider of Four Horses" Kubicki, the one who at the final round of 2012 Honda Gymkhana almost catched up with Poland Champion "Terminator" Wojtek Grodzki, loosing President Cup by only 0,26 sec., now in Szczecin crashed and get injured. Grześ "The Pear" Uliński, who hadn't been sleeping at all, driving all night from Warsaw, made a great time of 2:06 on wet, but Rufi and Beniamin were even faster - both made 2:00, however Rufi run down one cone.
Second course of timed runs on dry track brought much better results. Grześ was being catched up by Konrad Filipiak from Poznań and "Coff" Krzyś Kubanek from Szczecin. Grześ and Konrad made 1:56, but "The Pear" had no penalties, and Coff was even better with 1:53. But it was Grześ who gained third place - he had over 10 seconds of advantage from 1st run (the sum of two times determines placing). Fighting for first place Rufi had one second to catch up with, but always calm Beniamin made it even one second better than "Dark Horse", setting also best time of the track, 1:50, and winning the competition.

The power of friendship
Ones who achieved podiums were rewarded with Modeka jackets mentioned above and also with balaclavas and lumbar protection belts from Modeka, vouchers from Motorismo shops network, total value of 300 EUR, and greases, jackets and gadgets of Motul, sponsored by Mata, authorised distributor. The only gymkhana girl "The Toast" was rewarded with Modeka gloves. The commentator, "Jelly" Daniel Kisiel, sports journalist from Tricity, noticed that special Fair Play award should be given to Adaśko and organizers, because without their mechanical and vehicle support three of four standing on tops of podiums of various classes, and also one on 3rd place, all of them guests without support teams and local infrastructure, wouldn't be able to complete the races.

All of the racers, and also the spectators, say that they had awesome fun and are going to come to the second edition, on 6th July. "People have so much fun probably because we organize the event for them", says Lila of motoFUNdation. "We want to share what we have most valuable, our passion. In the previous season we participated in competitions as racers and support team members, and probably owing to this experience, we know how to meet participants needs". This passion of organizers was able to inspire the involvement and devotion of 20 volunteers. Everybody working with event organizing was doing it after work or during time off. I was particularly impressed by linesmen standing for few hours in rain and wind, focused without break... 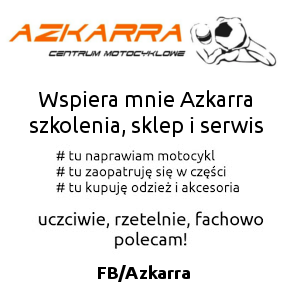